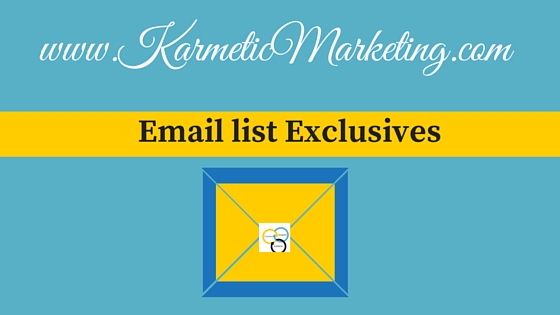 I don't know about you but I get so frustrated with everyone asking for my name and email address, just to get a new update for something I subscribed to earlier in the year.  Wouldn't it be nice if the update was sent to you because you were already on their list?   Wouldn't you feel awesome if for once, just once, you got an email that said "Hey, I'm hosting a webinar & I'd really like it if you to tuned in!  Here's the link."

I don't want to sound like a meany-jeany but if I already said that I'm interested in what you're talking about doesn't it just make for a better subscriber experience if you made it exclusive to those that are already on your email list?

Enough ranting, now its time for action.  From this day forward, I'm going to implement a standard for you, that's if you're on my email list.  Starting December 1, 2015, I'm going to begin hosting a short tutorial on a different social network or tool and send it to you.  That's how much I value your time.

Now, what to name this series?  Hmmh?  Ok, I've got it!  It's going to be called the Exclusive Execution Series.

Sign up for Personal Shopper by Prime Try Before You Buy

Holiday wishes and thank you from Karmetic Marketing

As the year comes to a close and the new year begins, I wanted to take a moment to thank each and everyone of you for the ❤️ you’ve given, the conversations we had and the friendships we’ve begun. My days are filled with information, clarity, focus and fun and I have you to thank for it!   I look forward to being a continued resource and student with you all! Merry Everything, Happy Always, Karma Oviquio